WHY PEOPLE FAIL (Story Time From A WAHM) 😬 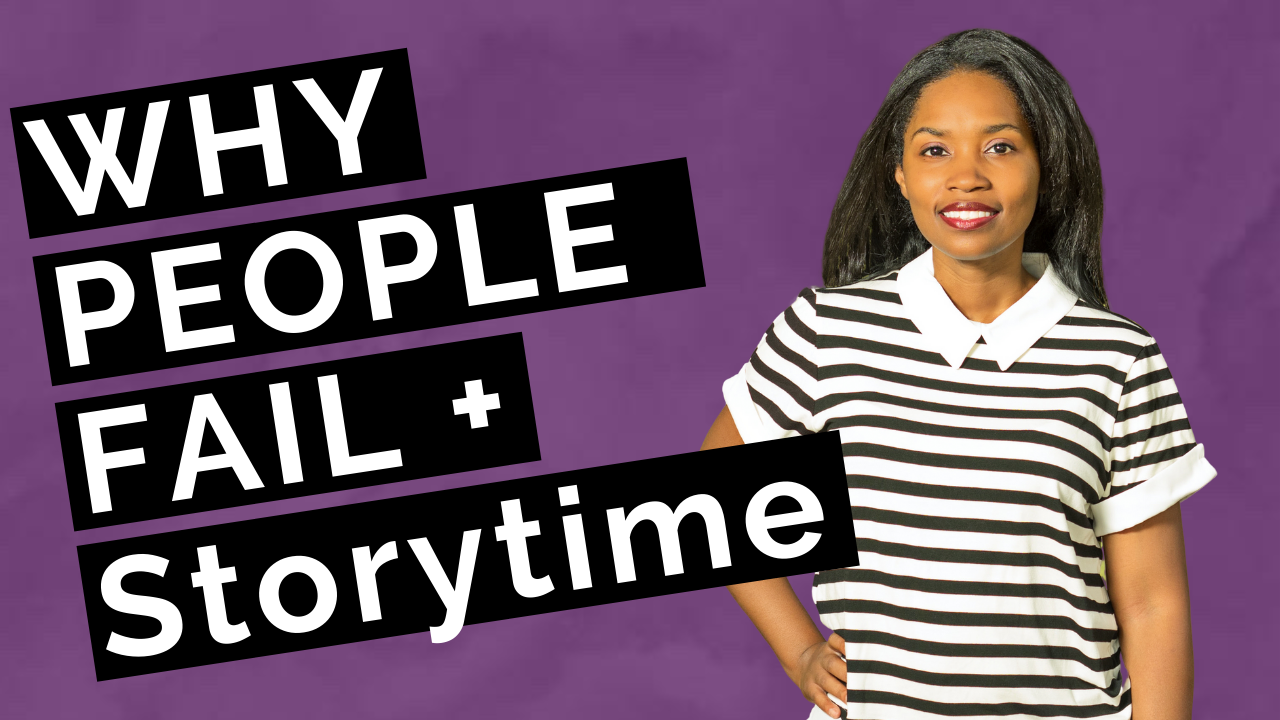 DISCLAIMER: As an Amazon Associate I earn from qualifying purchases. This post contains affiliate links that will reward me monetarily or otherwise when you use them to make qualifying purchases. In addition, there may be non-Amazon affiliate links in this post which means I may receive a commission if you purchase something through a link. However, please be assured that I only recommend products I have personally used and love!

Why do 99% of people fail in life? The reason why most people fail, in my opinion, falls down to one reason. And you will learn this reason in the video.

In this video, I share a section of my life story in hopes that it will help you to keep moving forward and that you don’t give up on your dreams. I don't get into the common reasons for failure, cause of failure, or sharing other successful people's stories.

If you’re ready to learn why people fail in life and hopefully get motivation for your own life, then please watch this video. Or if you prefer reading, you can do so below... Here's to chasing our dreams! 🥂

If you enjoyed the video please give it a tweet out: https://ctt.ac/a2p1z

We begin this story in 2003. I'm hired in corporate America. My goals were to reach the top, maybe not CEO, CFO status, but definitely wanted to climb the ladder from where I was. I really enjoyed the job and I enjoyed the people which whom I worked with. Life was so simple then.

My parents were proud because for this small community there were only a few companies that were deemed the best to work for.  As if when you're hired at these companies you just got hired to work at the White House or something. I mean what is that with small towns. Yes good pay and job security (or so I thought) but there were plenty of opportunities out there just beyond the county borders. Although I didn't know it. Yet...

Now fast forward a couple of years, the birth of my first child is here and I take eight weeks off. My husband takes off a week. Now when you're pregnant, everybody prepares you for the pregnancy. Everybody prepares you for the baby as far as telling you stories of what to expect. People tell you how expensive it's going to be also. But what nobody ever shared with me had me utterly shocked...

Why Didn't Anybody Prepare Me?

When you go back to work and you have to leave your child behind with a caregiver is the most crazy excruciating pain I have ever experience. Oh my gosh. I couldn't think. I couldn't concentrate or focus. And the hours just dragged. I just kept looking at the clock. I was worried. How is he doing? Is he okay? How is something that is so painful not mentioned? I just can't believe I'm the only one on the planet who feels this way.

Have To Get Home To My Baby

Well, this mama on that day decided she couldn't do it and I was going to work from home from then on out. That was my decision. I didn't want to be a stay at home mom. I wanted to make my own income. So the next best thing was to be, yeah, I work from home. I just needed to find the job that was going to get me there.

And I went to the internet. I looked up mailing letters. I tried doing surveys. I also looked into trying out products and things, but nothing was giving me the income that I needed to quit my corporate job.

My sister told me about medical coding offered through AHIMA. She was a medical coder and has worked from home for years. Well as long as I can work from home this sounded good to me.

Yippee! I finally finished all my courses for medical coding and was able to sit for the exam. The exam would last 4 hours and it was scheduled on a Saturday. I was so nervous because I barely prepared.

Medical coding seemed so boring to me. Extremely important yet boring to me. Anyway, I used up all the allowed time because that test was so hard. However, I couldn't wait to get my results so I could find another job and start working from home.

When I got my results I had failed. Failed by one question at that. Dangit. I would have to wait another 30 days (if I remember correctly) before I could test again.

Cancer Registry to the Rescue

Then my sister told me about another field called cancer registry. So I looked into it and I would have to take an additional 6 classes. Well, I got to do what I gotta do. I want to get home to my baby. Right. So I went back to school - Again. Actually side note this as pretty much been my trajectory of life. So much so that my father has called me a Professional Student 😂

If you would like to learn more about about the wonder field of Cancer Registry you can do so here and join the National Cancer Registrars Association's (NCRA) Facebook group here!

Ok so now we are in 2009. I'm still in school. At that time Cancer Registry school was offered at AHIMA. However, cancer registry wouldn't be as easy to acquire as Medical Coding. Because in order to be licensed, you have to do an 160 hours internship. How in the hell am I suppose to do that I have a full time day job for Pete's sake?

I use all my vacation.

I had 15 days of vacation and I use all of it except maybe three days. My corporate job followed the same holidays as school, but the hospital only follow like the six major US holidays.

So where the corporate job took Martin Luther King Jr day off in January, people were working at the hospital.

To fast track the time though, I did take a full week off from my corporate job to work at the hospital. Which was funny because everybody wanted to know what I was going to do on my vacation.

And I couldn't tell them, Oh yeah, I'm going to take a week off so I can go work for somebody else because I'm going to leave this job one day. So instead I just said, Oh, I'm just, you know, just going to hang out and stay at home. Like you're not going in like, no, we're not. I mean, I don't know. We might go somewhere. I'm just, I just need to take a break.

To date, I don't think I had a more stressful year than 2009. 2009 was the year of Hustle. In order to sit for the examine that year I had to have everything completed by the end of June. This means I had to use up most of my vacation to get my intern hours in by June. In addition to being enrolled in my 4 final courses. No way, if someone explained to me what all I had to do I think I would have done it.

Well, lo and behold, I did my internship and I took my test. I pass on the first try and so happy with that.

In March 2010 I was hired as a part-time follow up clerk. This wasn't the job that I needed but it's the job that I took to get my feet in the door. I had to train for the job on Saturdays because I still had my full time job at corporate.

You know thinking back all I can think is what the heck, was I crazy... Yeah crazy about what I wanted to do. I still can't believe that I did all that just to be able to work from home. But anyway, the follow up clerk job was pretty easy so after a couple of days of training I got to work from home pretty quick doing that job.

So if you're good at math... I have 2 jobs now. A full time job working on site at Corporate in the accounting department and a part-time job as a follow up clerk at home. With 2 kids. And a husband.

I didn't get the job that would allow me to quick corporate and work from home until later. I didn't really get a job until 2012.

This job was out of town. So not only am I still not working from home, I have a commute every day there and back that lessen, even more time that I had with my family. As I'm writing this story and strolling back through memory lane, I feel like I'm telling the story of someone else. Some movie Taraji P. Henson or or Halle Berry would be cast in. I cannot believe I'm talking about me. I cannot, until this day, believe all the sacrifice I endured to get what I wanted.

And it wasn't until late 2013, before it got really cold and nasty that I was able to finally work from home. I'm working from home with my kids, but you know, by then they're in school now, but I'm a work at home mom now and I only need to work on site once a week.

Now somebody I know still working at corporate America found out that I had been working from home for over a year now and she was mentally done with corporate America. She wanted to be home with her kids too. She wanted to be with her babies and so she said, I'll do anything. Tell me what I need to do. So I told her, I told her exactly what she needed to do, exactly what I did and she signed up for her first course, the prerequisite, which was anatomy and physiology. I was really excited for her.

This disappointed me. Why? Because I knew that she really, really wanted to be home with her babies. How did I know this? Because why else would she purchase the course and take it?!  I really wanted it for her, but you can't want something more than somebody else. And to see her give up like that. I felt bad for her in a way, if that's truly what she wanted to do was work for home.

Why Most People Fail

They don't roll up their sleeves and do what they gotta do. They give up too easy. I mean, there were times I wanted to give up. There was times that I took a break. It's like, this is driving me crazy. I could take this next class and guess what? I still won't be home. I still got to find a job, or I still got to work another year, 10 years, y'all 10 years. And most people want immediate results. And when they don't get those immediate results, they give up. Um, but you got to want what you want a lot more than the comfort that you're standing right now. So that's the only way you're going to get what you want. That's the only way you're gonna pull yourself forward to do those hard things and make those hard decisions where you're giving up 15 days of vacation and you're working all your holidays and you're commuting when you've never had to commute before. That's why there's only 1%, and that's why most people fail. I hope you enjoyed that story. I will see you next time. Bye. 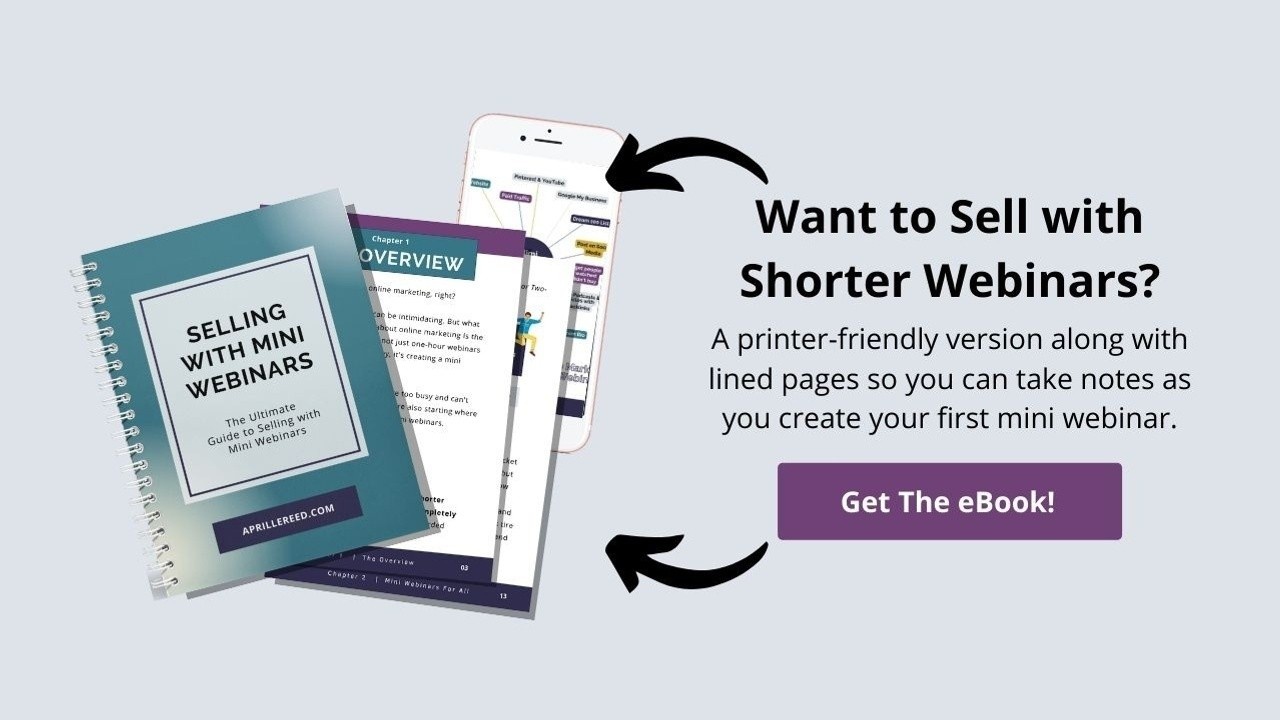 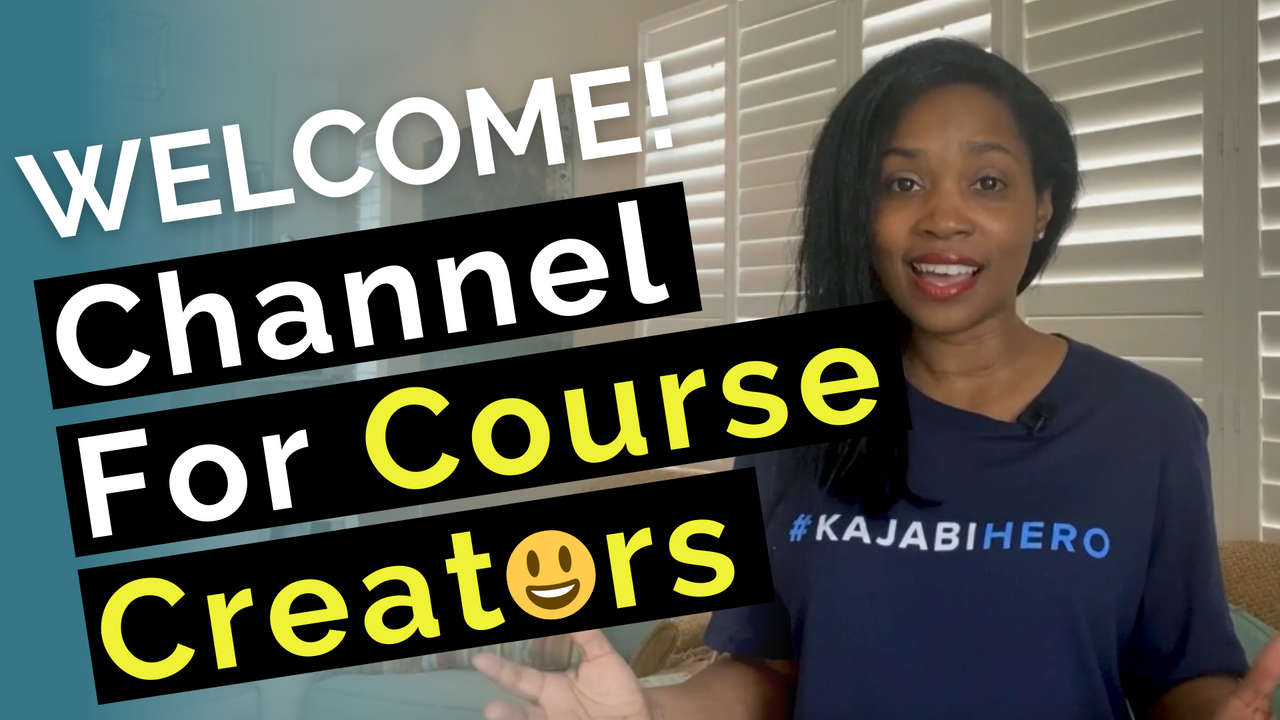 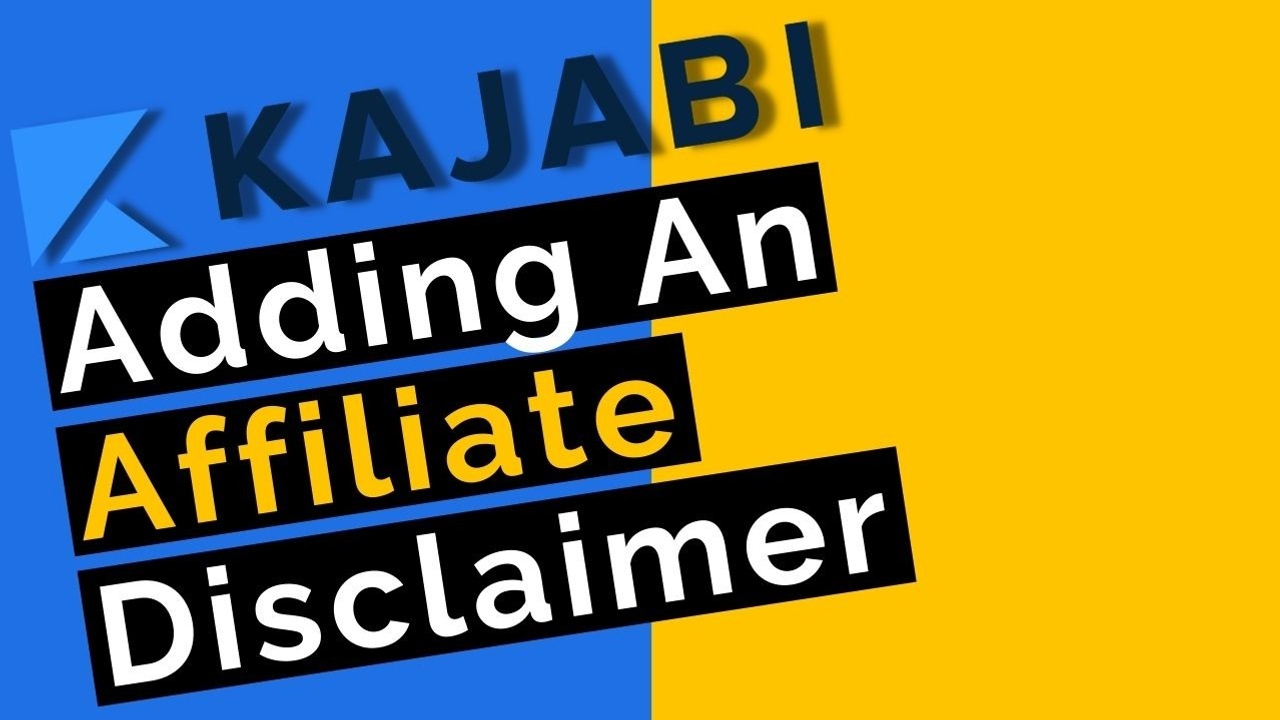 How to Add an AFFILIATE DISCLOSURE to KAJABI Blog Posts 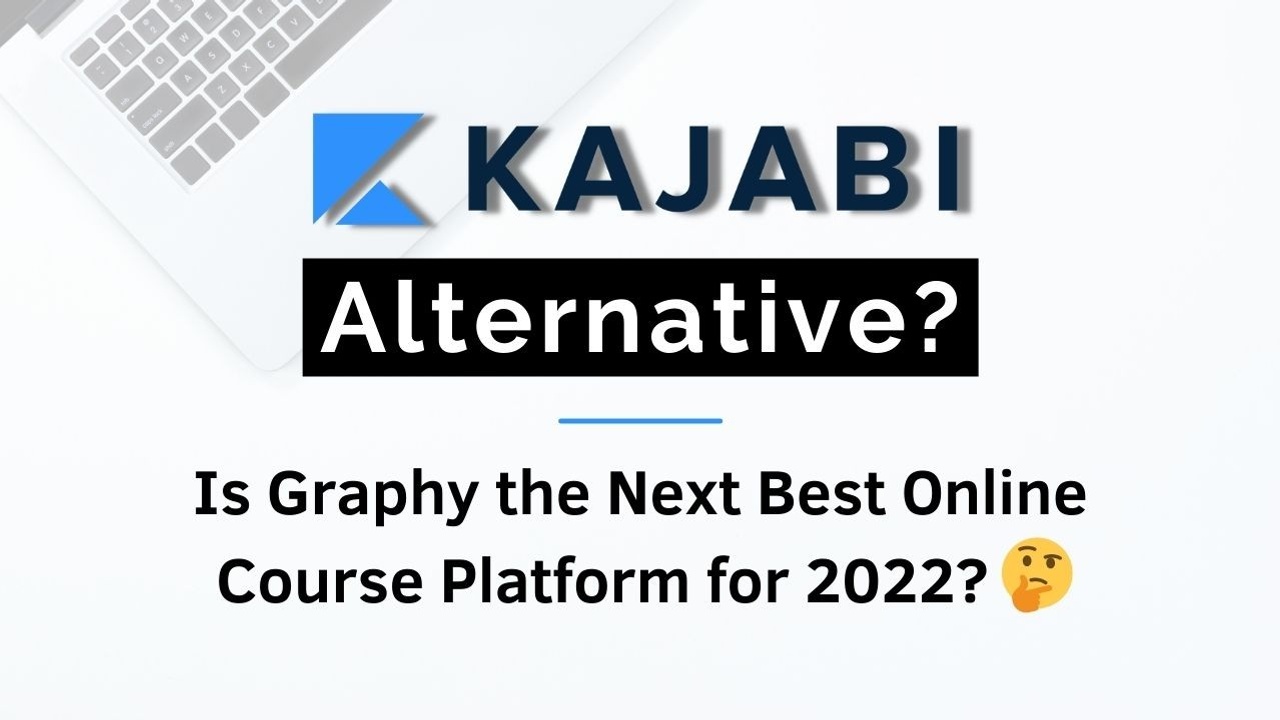 Kajabi Alternative: Is Graphy the Next Best Online Course Platform ...

Become my new Pen Pal and get some great online business & marketing advice!